Just a quick update to show I'm making some progress with this project! Finished the first batch of vehicles, the ones I already had from Mad Bob Miniatures kickstarter, but now available on his website.

The truck will carry the fourth FFL section, which I have yet to paint, and the staff car will be for the overall HQ unit.

So, next up, and currently on the painting desk are the LMG and NCOs to go with the first three FFL sections, along with their officer and his aide (an Artizan Goumier who conveniently has an SMG), plus the overall HQ for this little force. Plus a Crusader French 25mm gun so I have a dismounted option as well as the portee. But more of these when I have them finished. 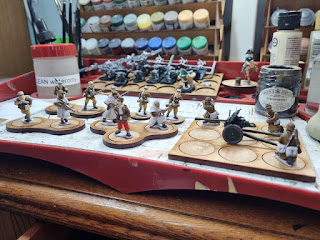 My order of more vehicles from Mad Bob turned up too, quicker than I thought, but I can't show you those as I haven't put them together yet...

Popular posts from this blog

Swedish Napoleonic Army - the most obscure you can get?

October 11, 2020
My fascination with the Swedish Napoleonic army goes back to the early 80's with the publication of WJ Rawkin's book on the subject. At the time I thought it was the most obscure thing I had ever come across, but I was also fascinated by how different the illustrations looked from the other uniforms of the time, and I soon determined that eventually I would have a wargames army to represent this proud group of men. I also got the Rawkins book on the Neapolitan army, but although that was also pretty fascinating, they were pretty much chocolate box soldiers and a Prince's plaything, whilst the Swedes has actually fought an entire war against the Russians during this period that I'd also never heard of.  The Swedish - Russian War 1808-9 Actually this is only really obscure to those of us who have been brought up in the English education system, which continues to pretty much ignore the rest of the world, unless we were invading or colonising it. I suppose this is true of
2 comments
Read more

The loss of a friend - a tribute to Duncan Macfarlane

June 28, 2021
This is based on a few words I said at the gathering at the Sir John Borlase Warren following Duncan's funeral last week. Others were more eloquent, Dan Faulconbridge and Richard Tyndall both spoke movingly at the funeral itself, John Stallard quoted Bryan Ansell in saying that Duncan's magazines had probably been instrumental in saving the historical side of the bobby during the 80s and early 90s and making it what it is today. Rich Clarke and Peter Dennis also paid tribute to the influence he has had on the modern wargames scene, both here and internationally. But these are my personal thoughts and memories: Duncan was a man in many ways set firmly in the past, his knowledge of history, particularly military history, was both deep and diverse, but I believe he was also a very modern man, being what we would nowadays call a great networker, a facilitator, and an influencer. In the days since his sudden death (and we now know it was from heart failure) many have paid tribute
1 comment
Read more